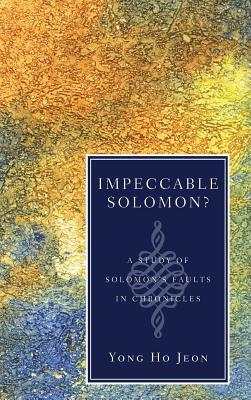 Is Solomon idealized in Chronicles at the cost of honest writing of history? To this question, the consensus view says, Yes. However, Yong Ho Jeon takes a different route and maintains that the Chroniclers portrait of Solomon is much more nuanced than many suppose. Jeon employs a reader-sensitive approach that considers the biblical writers intention to use his readers prior knowledge and the reading process itself to present a portrait of Solomon. Applying this methodology results in a new interpretation of Solomon not only in Chronicles but in Kings as well. Endorsements: This is an important book challenging the fashionable view that Chronicles whitewashes the character of Solomon.

It is carefully and thoroughly argued, and future students of Chronicles will have to take it very seriously. --Gordon Wenham, Trinity College, Bristol With careful attention to the authors actual statements (and silences) about Solomon, a new reading of Abijahs speech in 2 Chronicles 13 on the division of the kingdom, and a close study of the authors communicative methods, Jeon convincingly shows the Chroniclers Solomon is more complex than conventionally thought, and certainly far from faultless.

--Brian E. Kelly, author of Retribution and Eschatology in Chronicles Jeon provides a carefully argued and compelling critique of the current consensus. In his view, the Chronicler, far from presenting us with a flawless Solomon, is deeply critical of several aspects of Solomons reign. However, Jeons interest extends beyond the Chroniclers portrait of Solomon to the nature and purpose of Chronicles as a whole. His reader-sensitive approach to the text invites us to reevaluate the Chronicler as literary artist, theologian, and historian.

--John Bimson, Trinity College, Bristol About the Contributor(s): Yong Ho Jeon is International Chaplain and lecturer at Trinity College in Bristol, UK. He is also the pastor of Reading Korean Church.